Living Water Myanmar is a community development project that focuses on Water Security in one of the most impoverished regions of the country.

In the early stages of the project, the local Project Manager visited well over one hundred villages in central Myanmar to gather baseline data on current water needs and related infrastructure. The In-Country manager has field- tested optimum designs for standardized construction of 3,000 gallon and 5,000 gallon water tanks. The In-Country construction team, with labour input from each village, construct and install concrete water supply tanks and piping systems, usually best located in the grounds of local schools.

The GDG partnership began in May 2014, with a goal of funding a further 52 village water tanks over a three year period.  Thanks to the hard work of the in country team and generosity of our donors this goal has been well-surpassed, with 184 water tanks being completed within this period! Living Water Myanmar now plans to install water tanks in another 120 villages facing severe water shortages over the next three years.

Donate today to your preferred project.
UK residents can donate to support the humanitarian work of Global Development Group (GDG). GDG works directly with partner organisations implementing the project on the ground in developing countries.

You can nominate a specific project preference by entering the Project Number in the 'Reference' field when you process your donation. 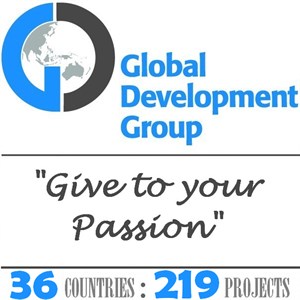 We are so happy to support this really worthwhile charity, many thanks to Sarah for making us aware of the great work that it does.

Wishing you all well with this brilliant project.

Keep up the good work, Ro